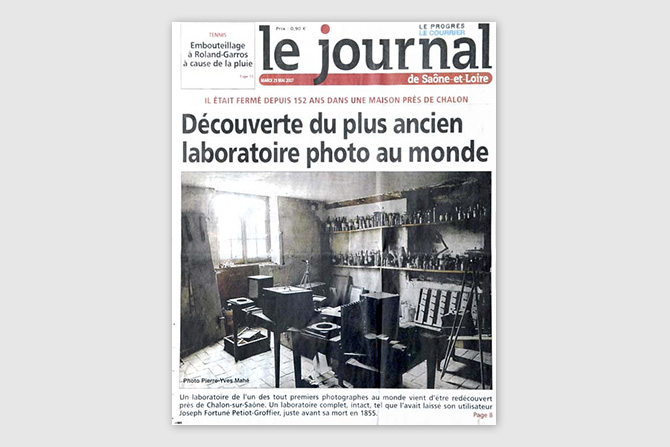 Turning a key in a lock has revealed a past hidden away for 152 years: the lab of one of the world’s very first photographers has been rediscovered. Intact and whole.

In 1840, Joseph Fortuné Petiot-Groffier opens his lab, which he uses until 1855 – the time of his sudden death under mysterious circumstances, most probably caused by the photo chemicals he used. As a safety measure, his heirs close down the lab.
Through the coming generations, the family inhabits all of their buildings near Chalon, with the exception of that very room, which – although shut – is not completely forgotten either. For the family is well aware that they have been sheltering a photographic treasure, carefully hidden away behind a protective wooden door on the second floor of their dwelling.

Two years ago, the family heritage changes hands for the last time: its new owner discovers the treasure. It takes him two years to find out to whom he would like to entrust the lab, with the aim of preserving it entirely and as a whole.

In the beginning of 2007, he thus contacts Pierre-Yves Mahé, the initiator of the Niépce House in Saint-Loup de Varennes. “I have something important to show you”, he lets him know. Pierre-Yves Mahé is willing to have a look at this seeming discovery – not having the slightest idea what he is about to witness. “Initially I didn’t place any importance to this announcement”, he frankly admits – already having been confronted with several discoveries, which – far from being sensational – had turned out to be fairly banal.
Yet, when the by now famous door eventually opens, a lost world reappears: an entire intact lab, in the exact state its owner left it on his death in 1855. “It was an intriguing moment: we didn’t know where to look. There were hundreds of bottles still containing chemicals, hundreds of books, tools and objects everywhere, among which several cameras allowing to make images according to the two first photographical processes, the Daguerrotype and the Collodion.

For Pierre-Yves Mahé, who – since 1999 – has been the leader of the Niépce House projects, this discovery immediately becomes the answer to some of the questions he has been asking himself concerning new research perspectives. “Everything was spinning around in my head”, and one major thought predominates: “What if all of this burns down tomorrow… I would mind for the rest of my life.” Frantically, he begins to take pictures – of everything. “There were so many things to be rescued”.

After the first impact of the discovery had been digested, the Niépce House team – Pierre-Yves Mahé, Jean-Louis Marignier and Michèle Lourseau – begin an inventory of the entire treasure, which has not ceased to surprise them. “It will take us several months of research”, Mahé estimates the forthcoming amount of work. Never before so many ancient chemicals have been discovered: more than 300 flasks, entire, some of which are still sealed. Next to this, more than 400 books dating back to the 1830s, containing all the contemporary photographic knowledge. And, eventually, all the accessories necessary for the developent of Daguerrotypes and Collodions – intact and complete.
By simply opening a door, a marvelous leap in time has been brought about. This newly-discovered lab and the result of the forthcoming research will be presented at the Niépce House in Saint-Loup de Varennes, in the very place where the photographical adventure began. Definitely Burgundian!