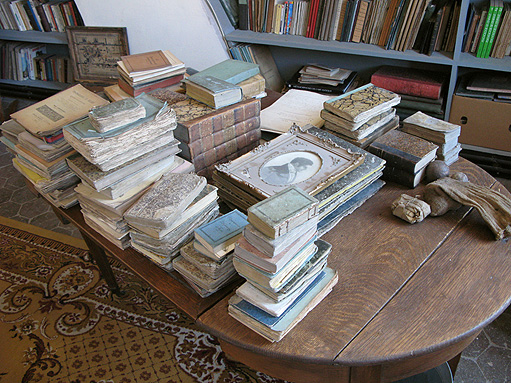 A bit of family history…

Among the Niépce family, Nicéphore is well-known, as is Abel Niépce of Saint Victor, who was born at Saint-Cyr and became the military governor at the Palais du Louvre. He first followed Nicéphore’s photographic work and then invented the first process on glass (Albumine).
Last but not least, there is David Niépce, whose name is carried by the Collège de Sennecey.

Who was David Niépce?

David François Etienne Pierre Laurent Niépce was born into a royalist family in Chalon on 12 September 1781. A student at the Ecole des Oratoriens de Chalon, he and a couple friends preferred to play truants to serious studies. Due to his lively, strong and righteous personality, David quickly became the leader of their group – a character trait which marked the most important dates of his career.
During the French Revolution, David Niépce was declared “a good patriot and republican”, followed by a decisive first meeting with the then sergeant Bonaparte, which was to considerably influence his life.
Enrolled in the voluntary republican army at Givry, he thus participated in all major Napoleonic wars: Marengo, Austerlitz, Jena, the Prussian campaigns, Silesia, Poland.
Named adjutant to the King of Westphalia (Napoleon’s brother), David leaves the army to serve in this position until 1812, when – as colonel general he participates in Napoleon’s terrible campaign in Russia. Only after the emperor’s exile in Elba is he reunited with his wife, the baroness of Zandt, and their six children.

In 1852, just after the 1848 Revolution, David Niépce is elected into the General Council of Saône-et-Loire. For 17 years, until his death in 1869, Sennecey and its canton thus benefit from his will to progress – mostly with regard to public education, in particular the conditions for teachers and students. This is why the General Council decides on 9 September 1988 to give his name to the Collège de Sennecey le Grand.

Colonel David Niépce – frequently commuting between Sennecey le Grand and Paris – also played a decisive role in the history of the invention of photography, being the link between Nicéphore and Charles Chevalier, the Paris-based optician. Chevalier not only introduced Daguerre to Nicéphore, but also was the supplier to Petiot Groffier, whose laboratory – the world’s oldest – is already on view in the Niépce House.

David and Nicéphore Niépce, who were cousins, had a very close relationship to each other. Nicéphore liked to stay in Sennecey, where the entire family met during his visits.

In the attic of the family house in Sennecey – thoroughly searched this year (2010) – we thus managed to find David Niépce’s library, objects belonging to his cabinet of curiosities, as well as photo accessories, clearly showing his growing interest in photography since 1839, when he started to follow Nicéphore’s work.

The Niépce House in Sennecey today is a beautifully renovated guest house, which allows those interested in history to stay in the very same surroundings Nicéphore and his family enjoyed during their reunions.

The collection belonging to David Niépce will be shown for the first time during the National Heritage Days 2010 (free entry for the inhabitants of Saint-Loup).