Home / Bicentennial of the Pyréolophore

At initiative of Manuel Bonnet*, and with Jean-Louis Bruley’s technical supervising, Spéos and Maison Nicéphore Niépce have decided to celebrate the bicentennial of the Pyreolophore by rebuilding it as it was originally. It is the first internal combustion engine ever, which was invented and patented by the Niépce brothers in 1807.
10 years later, they were the first in the world to make an engine work with fuel injection system.

A celebration took place at the occasion of the “Journées du Patrimoine” (National Heritage Days) 2008, in the very place of the invention…in the House of Nicéphore Niépce!

See the exhibition in the museum 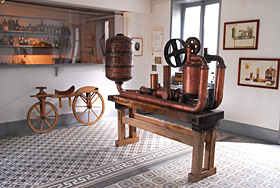 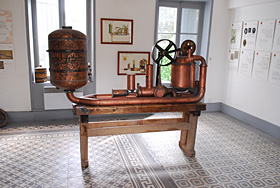 *Manuel BONNET: Direct descendant of Nicéphore Niépce, Manuel Bonnet is the co-writer with Jean-Louis Marignier of the book “Niépce, correspondance et papiers” published by Maison Nicéphore Niépce editions in 2003, and the initiator of the celebration in 2007 of the bicentennial of the invention of the Pyreolophore by the Niépce brothers.
In the course of the research made by the Swedish filmmaker Vilgot Sjöman on Alfred Nobel, the important study by Manuel Bonnet on Paul Barbe has found recognition through the creation of files bearing his name in Nobel archives in Stockholm.
He has also contributed to the latest book of the prefect Max Lavigne entitled : “Chantecoq, De la Cité Royale à la Commune républicaine” in 1996.

Invention of the Internal Combustion Engine