Nicéphore Niépce, Daguerre and the Physautotype

On his way to England, Niépce met in Paris with Louis Jacques Mandé Daguerre, painter and decor designer, who had a reputation as camera obscura specialist. Hoping to shorten the exposure time of his process, Niépce decided in 1829, to associate Daguerre to his research to build a camera obscura giving brighter images.

This association did not bring any noticable progress to the bitumen process, on the other hand, the two partners discovered new photographic processes using as photosensitive agents tree resins and the residue of lavender oil distillation. With those, the exposure time went down to about 8 hours in the sun.

Principle and technique of the physautotype

The photosensitive agent of this process fine-tuned by Niépce and Daguerre in 1832 was the residue of lavender oil distillation.

1 – Niépce and Daguerre obtained this residue evaporating lavender oil by heating it until they got a dry product. Submitted to heat, lavender oil takes a a yellow hue that intensifies with the elimination of the volatile stuff.

2 – After distillation, only a dark brown tar dessicated by heat is left, becoming hard and brittle.

3 – Niépce and Daguerre would then dissolved a small amount of this tar in alcohol, then pour the solution on a well polished silver plate

4 – After the alcohol evaporation, a uniform white deposit remained on the plate. The thus prepared plate was exposed to light in the camera obscura (for about 7 to 8 hours).

5 – After exposure, the plate was put upside down above a tray holding oil of white petroleum (something like kerosene). The fumes of this kerosene were sufficient to develop the image without any further treatment.

This process gives directly positive images, since the white deposit remains on the plate, at places that were touched by light, while the kerosene fumes render transparent the zones that were not illuminated. However, with the effect of reflexions on the metal appearing at places where the white deposit has become transparent, images can be seen as positive or negative.

Each year, the National Heritage Days are the occasion for Niépce’s House to present the novelties that are later exhibited on a permanent basis.

Since J.L. Marignier’s research published in 1999, one knows that the image of the “Table Servie” – whose origins were uncertain – had indeed been taken by Nicéphore Niépce. The researcher’s investigation shows that the image had been a physautotype and was one of Niépce’s last works.

In 2004, J.L. Marignier and M. Lourseau tried to find objects similar to the ones used by Niépce, so as to reconstruct the “Table Servie”. 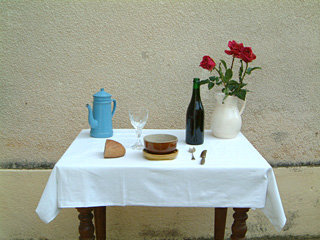 Once the image had been digitized, it was used to determine the dimensions of the different objects and the table itself. Knife, spoon, glass, cup, bowl, bottle, vase, coffee pot of similar size, form and color were collected at various antiques shops and second-hand markets. When the objects were eventually set on the table, the image reappeared in three dimensions.
J.L. Marignier and M. Lourseau – specialists of the photographic process of the physautotype, which they were the first to rediscover in 1992 – decided to photograph the table with the very same process invented by Niépce and Daguerre in the House at Gras during the summer of 1832.

At the end of August 2004, the reconstructed table was set up in Niépce’s garden in front of a camera obscura, into which had been placed a silver plate coated by a white layer of distilled lavender essence. Four hours later, the plate – in contact with the vapors of petroleum – let appear an image highly similar to the one taken by Niépce.


The reconstructed La table servie and the physautoype taken are permanently exhibited on the first floor of Niépce’s House.

J.L. Marignier’s investigations are published in Niépce, l’invention de la photographie and Niépce, Correspondance et papiers, as well as in articles published in Le Photographe and Réponses Photo in 2004.