The Pyréolophore: a new engine principle

It was in Nice that Claude and Nicéphore Niépce started their first works as inventors. Their interest was first focused on creating a new engine principle based on the use of air dilatation during an explosion. Did they have any knowledge of the works of Huygens (1625-1695), who had already used air dilated by the explosion of gunpowder in a cylinder to move a piston?

At first, the Niépce brothers used as an explosive a powder made with the spores of a plant: the Lycopodium (broad moss), then they used coal mixed with resin. So they invented the first internal combustion engine, which they named Pyreolophore (pyr=fire, eolo=wind and phore=I carry or I produce).

The 1806 report on the invention of the pyreolophore

In 1806, they wrote a first report. A commission of the National Institute, also known as the Sciences Academy, which had been given the task of evaluating the invention, gave its verdict as follows:
“The fuel ordinarily used by M.M. Niépce is made of lycopodium spores, the combustion of which being the most intense and the easiest one; however, this material being costly, they replaced it with pulverized coal and mixed it if necessary with a small portion of resin, which works very well, as was proved by many experiments. In M.M. Niépces’ machine no portion of heat is dispersed in advance; the moving force is an instantaneous result, and all the fuel effect is used to produce the dilatation that causes the moving force.
In another experiment, the machine installed on a boat with a prow about two feet wide by three feet high, reduced in the underwater part and weighing about 2,000 pounds, went up the Saone river with just the engine power, with a speed greater than the river’s in the opposite direction; the amount of fuel burnt was around one hundred and twenty-five grains per minute, and the number of pulsations was twelve to thirteen in the same amount of time. The Commissioners then conclude that the machine proposed under the name Pyreolophore by M.M. Niépce is ingenious, that it may become very interesting by its physical and economical results, and deserves the approbation of the Commission.”
Report by Lazare Carnot and C.L. Berthollet on December 15th, 1806.

The Niépce brothers had carried out some tests on the lake of Batterey, located in the midst of La Charmée woods, by Saint-Loup-de-Varennes. They obtained a patent for a ten-year duration. This patent was signed by the Emperor Napoléon and is dated July 20th, 1807.
Nicéphore and Claude kept improving the Pyreolophore. On 24th December 1807, they informed Lazare Carnot that they had obtained a highly flammable powder by mixing one part of resin with nine parts of coal. But in 1816 their progress was not sufficient to obtain some subsidies from their invention. The patent’s end was near and Claude decided to go to Paris and then to England, hoping to exploit the engine.

The invention of the internal combustion engine

Nicéphore begins new experiments on the fuel. At the end of May 1816, Claude has the idea of another fuel: coal.

But as early as June 2nd 1816, Nicéphore writes to Claude: “I am pleased that through the result of your experiments on the ignition of coal,you were able to find out the many drawbacks attached to this fuel, and gave you the bright idea to replace with white oil of petroleum. {…}
Then I invite you very strongly to repeat on a larger scale this interesting experiment; because when people see that with a low oil consumption we can get enormous flame puffs, people will be astonished and will admit the real importance of our discovery.”
White oil of petroleum is akin to kerosene.

From July 8th 1817, Claude’s tests are getting more defined, according to Nicéphore: “As a matter of fact if you succeed in injecting white oil of petroleum with enough energy to get instant vaporisation, it is sure, my dear friend, that you should obtain the most satisfying result.” It was indeed, as we know now in today’s engines, fuel injection that Claude was inventing and fine-tuning. As a matter of fact the Niépce brothers are today credited as the inventors of the fuel injection principle.

The tests were promising. On July 16th, Nicéphore wrote: “You just proved again that Lycopodium, the most flammable solid substance, produces fewer flames than a given amount of vaporized oil of petroleum.”
Nicéphore made many tests. He vaporized the fuel by heating to red heat the end of the pipe through which the oil was running, but the results were less than constant. He then tried a new technique to have the oil sprayed like the lycopod powder at the time of ignition. First, he equipped himself with a pipe about 20 cm long (8 inches) and a diameter of 7 mm (1/4 of an inch). He filled it with water on a length of 3 cm and then blew in it violently. The water was expelled as a jet composed of tiny droplets, spread in a similar way than a powder. He improved this result by flattening the exhaust end in a rather short bevel reminding him of an “oboe reed”. He repeated the experiment replacing water with alcohol and setting a lighted wick at the exhaust orifice with the purpose of igniting the liquid droplets.

It was a success: “the alcohol detonated in burning like the lycopod”, he said. Nicéphore had just discovered that the fuel must be ignited when it is cold and as a vapor, as was the case with the kinds of heated pipes he used formerly. The mixture of air and of minuscule droplets of flammable liquid would then become explosive. The next step was to test white oil of petroleum. Nicéphore had a 9 mm diameter pipe made and bent at a 90° angle, so that he would no longer have to use his tongue as a valve. The part through which he had to blow was about 66 cm long and the one through which the oil would flow was about 33 cm. The exhaust was beveled as in the preceding experiment.
This was completely successful: “The flame, compared to the small amount of oil used, was enormous; it was intense, instantaneous, and detonated like lycopod”, Nicéphore said, and added: “the results that I just got, have rekindled my courage and fully satisfy me.” The smaller the amount of oil used, the bigger the explosion.
It was complete, combining efficiency and economy. Convinced by the performance of this fuel, he stopped testing completely.

A few years later, in 1824, Sadi Carnot (1796-1832), Lazare Carnot’s son, wrote a book titled: “Reflections on the driving force of fire and the machines proper to develop this force”, in which he made a commentary about the Niépce brothers’ engine:
“Among the first attempts made to develop the driving force of fire through atmospheric air, we must point out those of M.M. Niépce, which took place in France, many years ago, by mean of a device called pyreolophore developed by the inventors. This device consisted of a cylinder, with a piston, where atmospheric air was admitted at normal density. A highly flammable substance was projected at a very high level of fineness, and that remained a little while in suspension in the air, then it was ignited. The ignition caused an effect almost as if the elastic fluid had been a mixture of air and a flammable gas, like air and carbonaceous hydrogen; there was a sort of explosion and a sudden dilatation of the elastic fluid, dilatation that used to act entirely on the piston. This one would be set in a motion of a certain amplitude, and the driving force was thus created. The operation could be restarted by renewing the air and going through the cycle again.
This very ingenious and interesting machine, especially by the novelty of its principle, had a capital defect. The material that was used as fuel (it was lycopodium dust, used to produce flames in our theaters) was so expensive that any advantage of its use would have vanished: and unluckily enough, it was very difficult to use a cheaper fuel, as a body of very fine powder was necessary, the ignition of which had to be fast, easy to propagate, and left few or no ashes.”

Sadi Carnot only dealt with the first patent and seemed to have ignored the Niépce brothers’ later works with white oil of petroleum.
His commentas are rather elliptic and confusing. It is true that the Niépce brothers had demonstrated the power of their new engine principle by applying it to a piston (“NOTE” from 09.11.1806) and they had planned to apply it to “a pump as in fire machines” (“NOTE” read at the Institute on 17.11.1806), but one of the major characteristics of the pyreolophore was that it functioned by direct reaction.”
This is particularly what a century later, in 1925, led to the fame of Pierre Clerget et Auguste Rateau (cf. page 905). Erratum. Page 906 should read 1807 instead of 1808. 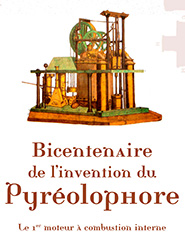 > See the exhibition in the museum

Invention of the Internal Combustion Engine